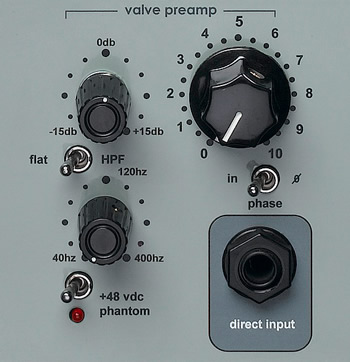 HIGHLIGHTS - Each Channel Consists of :

The AXIS 200VU high performance Valve Microphone Preamplifier has been designed to give the Professional and Home recording Engineer a High Quality Valve Microphone and Direct Input Preamplifier at a reasonable cost.Great care has been taken in circuit layout and design to create not only an accurate and transperent sonic tool but one that can also overdrive with symmetry and subtly dynamically control or ‘compress’ the input signal in a manner which is musical and close to the operation of the human ear.

As is common knowledge , Valves are distinctly different to Transistors and Intergrated Circuits in the sense that they have a unique operating region that does not terminate in an abrupt brick wall as Solid State Technology does.It is in this region that the valve expresses most of its harmonic qualities.Operating in a clean or transperent manner is also possible when the gain of the valve is dialed right back and degress of negative feedback are introduced to increase linearity and bandwidth.

The AXIS 200VU presents you with not only a practical and neutral audio amplifying device but one that can provide an enhancement of the audio signal only achieved through equipment costing many thousands of dollars more.Standing on the shoulders of the VMP series , the AXIS preamp provides yet another sonic pallet for the engineer or producer who endevours to turn the recording process into an artform. There are no chips in the audio path which means , above all else , the unit is very difficult to damage with an incorrect interface. Chips , or intergrated circuits , are often a weak point in consumer-level hybrid valve designs because they fail easily when overloaded.This is not the case with the AXIS preamp , being a true valve design , it is free of such failings and is ruggedly dependable.